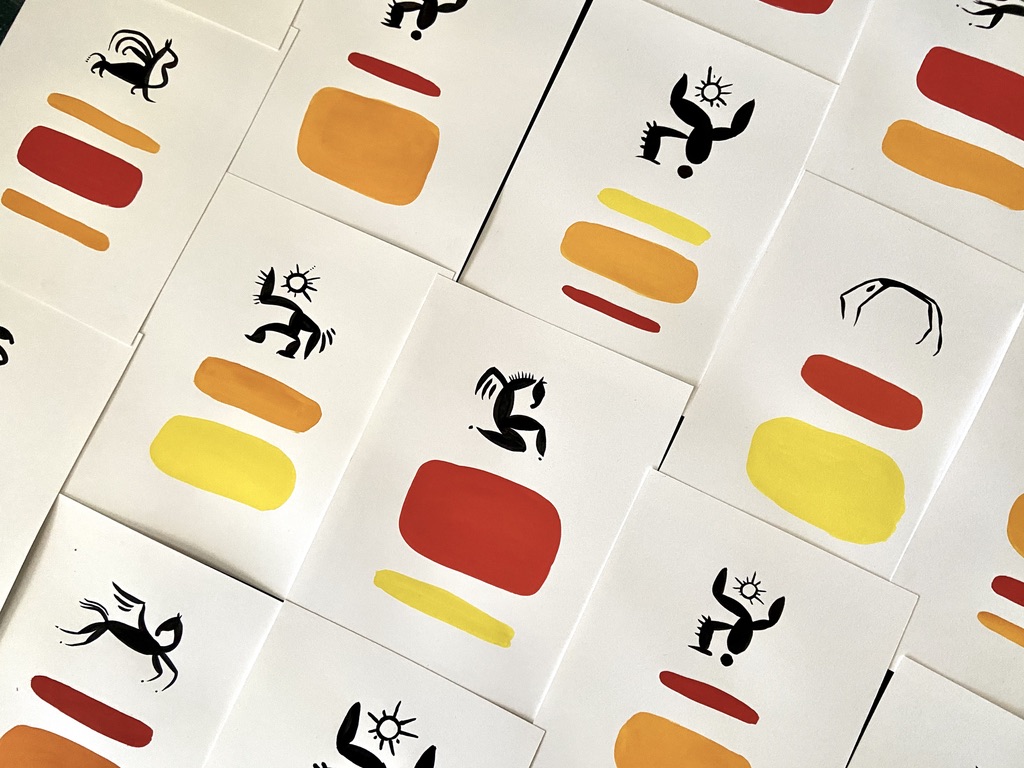 From the Sisyphean task, to Pandora’s box, the Midas touch and Achilles’ heel, characters from Greek, Roman, and indigenous cultures around the globe have an inescapable presence in everyday life and culture.

The stories of these gods, goddesses, heroes and anti-heroes have been continually retold and reinterpreted in novels, poems, plays, music and in every type of visual art throughout centuries, from ancient Greek mythology paintings and sculptures to contemporary art.

Following the work of Carl Jung, Joseph Campbell and other mythologists, I’ve created a series of works on paper (gauche and ink) that captures some of these myths.

The Winged Horse or Pegasus symbolizes heightened power of the natural forces – the innate capacity for spiritualization and for inverting evil into good.
Pegasus, whose name is possibly derived from ‘springs of the Ocean’ (pegai) or ‘of the wells,’ is a variant of the Greek word pege which means “spring” or “fountain” and the form is pre-Greek in origin, means “bridled horse” referring to the figurehead of a ship. Thus, Pegasus can literally mean “Fountain Horse.”

Horses are a potent symbol from almost every world religion and mythology. Many of its myths express the horse’s innate clairvoyance and ability to perceive the magic within humans. Some view the horse as the symbol of strength, virility and lust. Also, it is a symbol for loyalty and devotion, such as the faith it has with it’s master. It also represents the warrior spirit, bravery and courage.

Wings are a symbol that denotes “flight” and often represent prayer and contemplation, especially in the sense of feathered bird-like wings. A spiritual or religious symbol they represent the soul’s ability to transcend the weight of earthly burdens and rise above such concerns into the air, even to Heaven itself, to the presence of God.

The pegasus (flying horse) ultimately is a symbolism of power, freedom, innate talent, abilities or gifts, the gift of voice/communication, the gift of speech, and chance/opportunities.

Ra is the god of the sun and the king or father of all Egyptian gods. He’s often shown in human form with a hawk head, a golden disk with a serpent on top of his head as a crown, a scepter in his left hand, and an ankh in his right hand. The ankh was the ancient Egyptian symbol for life.

The symbol of the sun is an alchemy symbol. It is a symbol of origin that represents the completing of the Great Work. In the Hopi native tradition the sun god was the supreme ruler as it was master of the ability to help food grow, like corn. The sun represents life, influence, and strength. He will symbolize energy, will, being clear, and self.

Through all cultures the overall symbols and meanings of Horse includes:

Consider what kind of spiritual gifts Horse has appeared to bestow on you and how you are meant to work with its energies.Because you’re compelled to seek out Horse Symbolism and Meaning, it is a sign that your soul (higher self) is racing its way to consummate freedom and the ability to travel the entire universe.

For it is only Horse who has the strength and stamina to ride up from the darkness of Middle Earth, traverse all the lands of our world and ascend to the heavens and beyond; racing with grace and sovereignty between the 5 Elements: Earth, Air, Water,Fireand Spirit or Aether.Horse is an amazing spirit guide representing your personal goals, ambitions, desires and overall liberation.

The Griffin was considered as a Christian symbol for the Church’s ideals on marriage. It was also used to symbolize Jesus.

The lion, considered as the king of the land, is one of the most widely known animal symbols. It has been used in paintings and carvings, finds a mention in literature, and has been depicted on flags.The lion is one of the most preferred symbols of leadership and emperors. Since many centuries, it has been used as a sign for all that is considered as majestic because of its noble character, alertness, courage, strength, and power. It is seen in the Asian, African, and European cultures. It is carved on or erected as a statue on buildings, and believed to safeguard castles, bridges, churches, and tombs. It is also symbolic of values like self-control, strength, courage, and power. At present, the animal is mostly used as a symbol of fearlessness as the roar of the animal is firm and strong. The lion has also been highlighted in fables of the 6th century.

The winged lion symbolism appeared in Prophet Ezekiel’s vision where four winged creatures represent the four evangelists; Matthew as a human, Mark as a lion, Luke as a bull, and John as an eagle. An open book is seen lying below the front legs of the lion. It contains the text, ‘Pax tibi, Marce, Evangelista meus.’ The book is believed to symbolize the state’s sovereignty. Some depictions show a halo about the lion’s head, the book with the words abbreviated to their initials, and the lion.

The symbol of St. Mark’s lion can be seen throughout Venice. One of the spots to find the winged lion is the Piazzetta di San Marco in Venice, Italy where the bronze-winged lion sculpture stands atop two large granite columns in the Square. Another one is at Saint Mark’s Basilica in Venice, Italy.This symbol was known as lamassu to the Assyrians. It is depicted as a winged lion (or a bull) with the wings of an eagle and the head of a human. The eagle is usually associated with the Sun god, which controls and strengthens the lion, and the human head symbolizes intelligence.

0 comments on “Mythology Works on Paper”

Last evening one of the neighborhood girls asked about this poem by John O’Donahue, which was in our poetry box. It was sweet to hear her read it aloud.
It is what you think it is. I encountered two of these dangerous beauties on my trail run yesterday.
There are times when sketch or drawing can act as meditation. There’s a timelessness to getting lost in a work, even a simple work. Gauche sketch, with some graphite touches.
Unfortunately I know too many men who’ve sat in this seat. And, I’m not proud to say that I’ve certainly been this guy, too. Fellas, let’s do better to give voice to the #women in our lives — #wives #lovers #mothers #daughters #friends #colleagues and #coworkers
Mixed media studies on paper. Prepping for a larger paintings for a series centered on humans’ relationship with nature.
Turning away from judgement and fear, towards curiosity and love reveals previously unseen ways ahead. When we let the silence of our lives speak to us, instead of moving through life as if it’s a competitive race, we can hear and learn from our own inner teacher. That teacher is always there for us if we simply attune to it. It’s as easy and difficult as slowing down long enough to notice. When you’re lost and tired, turn to curiosity.
Loading Comments...
Comment
×
%d bloggers like this: